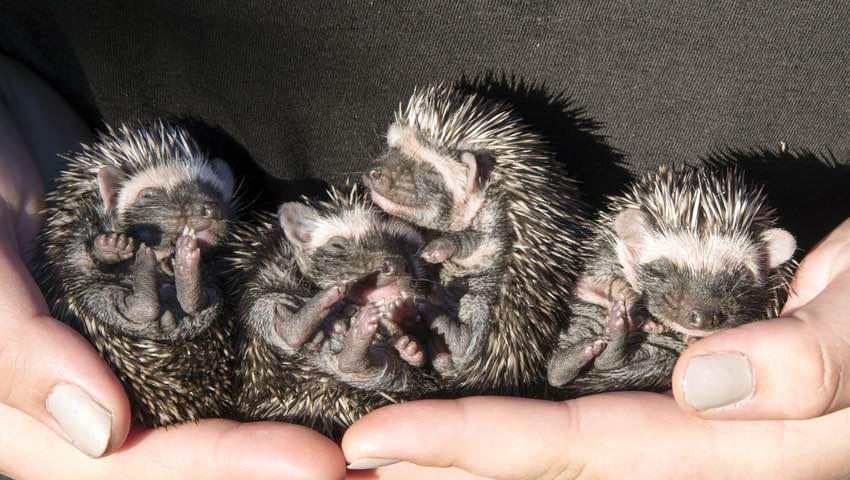 Breeding hedgehogs is not easy. Getting them to mate is no problem - if you house a male and female together they’ll do it whether or not you intend them to - but ensuring a healthy delivery and keeping newborn hoglets alive requires constant attention and care.

It’s even difficult to tell when a female hedgehog is pregnant. You should also be aware from the start that not all of the hoglets will live to adulthood. A female hedgehog can theoretically give birth to anywhere from 1-11 babies per year without sacrificing her own health, but approximately 1/3 of the hoglets from any given litter will die before they’re 4 weeks old, even in ideal conditions.

Complications from breeding can kill a female hedgehog. It is not recommended to start breeding your hedgehogs until you have at least two years of experience in specifically hedgehog care. If you are committed to breeding your hedgehogs, you should seek advice from outside sources - including your vet, local breeders, scientific literature, and online forums - before you begin.

The information provided here is not a comprehensive guide - consider it more an introduction to the idea of breeding.

Hedgehogs aren’t fully mature until they’re about 6 months old. Though they can become sexually active much younger than that, you should wait until at least the 6 month mark to start breeding females. Males can theoretically start breeding at 4 months, though they may not be fertile until the 5 or 6 month mark. Keep your breeding pair separate if either individual is younger than this. Hoglets born to an immature female can be stunted, stillborn, and generally sickly. An immature mother is also more likely to die of complications, or to neglect (or even eat) the young.

Even a male/female hedgehog pairing that you plan to breed should be given separate housing. Partially this is to prevent the male from over-mating the female, which he will if given the opportunity. This is also for the protection of the hoglets - hedgehog mothers will usually care for their young, but hedgehog fathers are more likely to eat them.

Hedgehogs are most likely to breed successfully from April through September. Do not take this to mean it’s okay to house the genders together from October to March - this just means, if you’re trying to breed, you will have the best shot of achieving pregnancy from late spring to early fall. Mating happens quickly, and the male should need no more encouragement than shared playtime with a female to mount and mate with her.

As mentioned earlier, it can be very difficult to tell when your female is pregnant. About half of all copulations result in pregnancy. Hedgehog gestation lasts anywhere from 1-2 months, with an average length of around 35 days. If you’ve observed your hedgehogs mating, you should treat your female as if she’s pregnant until two months have passed since the last breeding opportunity. This means you should not attempt to mate her again assuming the first time didn’t take. It also means you should make sure she’s got adequate hiding space in which to make her nest, and you should provide her with extra soft nesting material, like scraps of fleece or flannel, or recycled paper bedding.

At around the 20-day mark you should remove the wheel from the mother’s cage, and keep it out until the babies are completely weaned. Running on the wheel could cause premature birth, or cause injury to the developing embryos. After birth, you run the risk of the mother ignoring the babies. Alternatively, she might try to bring her babies with her on her “journey,” trampling or injuring them in the process.

If you typically use a water dish, you should replace this with a bottle at the same point that you take out the wheel. Baby hoglets have been known to drown in water dishes.

Once there are hoglets in the nest you should disturb the mother as little as possible. You’ll know the hoglets are there because you’ll hear them chirping, even if you can’t see them. Resist the temptation to pick up or otherwise interact with the babies. A mother whose nest is disturbed will often eat her young.

For the first 10-14 days, you should do nothing except provide the mother with fresh food and water. You can scoop the litter box (quietly) but should not clean the cage or remove the mother. The only exception to this is if you notice any significant amount of blood in the cage. This is an indication of serious post-birth complications and you need to take your hedgehog to the vet immediately. You may run the risk of disturbing the nest, but if you don’t you’re likely to lose the babies and the mother.

Very rarely, a mother will not care for her young. In this instance, hand-rearing will be necessary. For the first three weeks, you can feed the babies goat’s milk or a milk replacement with similar nutritional content. The hoglets’ eyes aren’t open yet, and they won’t be able to search for food; you’ll have to feed them by hand using an eye dropper or an oral syringe. Bottle-fed hedgehogs will also need to be manually stimulated to release waste. You can do this by stroking their rear end with a warm, damp cotton ball, or a large Q-tip. Once a hoglet’s eyes are open, they’ll start moving around and you can switch them to a meat-based baby food. They’ll be prepared to switch to dry kitten food once they’re weaned, at about 5-6 weeks.

At this point, you should also separate the males from the females (including the mother) to prevent an unintended pregnancy.

Physical Characteristics of a Hedgehog

Hedgehogs are small spiny mammals that changes color from black to brown, in this article we will talk about Hedgehogs weigh, spines, behavior, teeth, diet, color and odor.