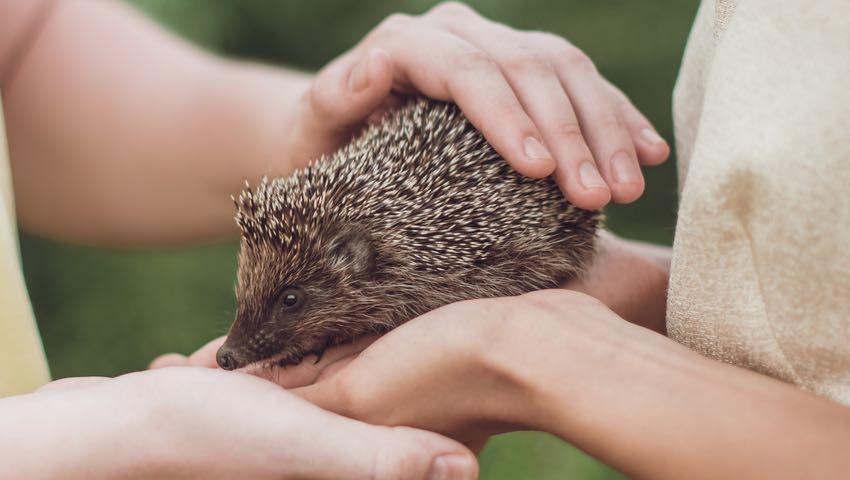 Health and personality should be your two main factors in determining which hedgehog to buy. Though hedgehogs are good at hiding illnesses, there are several signs you should look out for when you’re going to buy your new pet.

Make sure the animal is moving easily, without a limp or any dragged limbs. The eyes should be bright and clear with no crusting or discharge; the ears should be smooth and rounded with no visible ear wax. Any sneezing, wheezing, or discharge from the nose is a sign of an infection. Check the skin between the quills for dry patches or sores and make sure the fur on the face and underbelly is soft and not matted.

Hedgehogs should have no natural odor; if it smells bad, that’s a sign of a dirty cage or serious illness. Any poop you see in the cage should be firm and dark brown. If it’s green or slimy, the hedgehog likely has an intestinal illness or parasite. Even if these health issues are temporary, you shouldn’t buy an animal that’s sick.

Moving causes the animal stress, weakening its immune system and making an existing condition get even worse.

Once you’ve determined the animal is physically healthy, you should assess his personality.

Most hedgehogs will be a bit shy when faced with a new human, but he should unroll on your arm and relax his quills soon after you pick him up. An outgoing animal may immediately start exploring; a calmer one may simply sit on your arm and sniff you out. Both can be great pets. Decide whether you’d rather have an explorer or a cuddler and pick your animal accordingly. If you can, it’s best to handle more than one animal before you make your decision. If the hedgehog jumps, pops, clicks, or hisses at you, you should put him back. This individual may just be having a bad day, but those could also be behaviors that never go away. You should be especially wary if multiple animals you pick up at the pet shop or breeder respond this way to your touch.

Age of a new hedgehog

Hedgehogs ideally should be left with their mothers until they’re at least 6 weeks old. Beyond that, the age of the animal when you buy it is a matter of personal preference. Some breeders advise buying hedgehogs immediately after weaning. If the individual you buy is less than 12 weeks old, you’ll have to deal with at least one quilling.

The advantage of buying a fully grown hedgehog (6 months or older) is that its personality will be fully developed and you’ll be better able to assess what kind of pet it will be in the long term.

If you’re determined to buy a hedgehog with a specific personality, you should buy it as an adult.

Both male and female hedgehogs make good pets. There’s no appreciable difference in personality between the two, in terms of their interaction with humans - there are outgoing females and shy males.

Male hedgehogs will not get along with others of their kind, so if you want multiple hogs to have shared play time you should buy females.

Neither males nor females produce any kind of musk, though male hedgehog urine may have a stronger odor. Male hedgehogs are typically less expensive than females, if that’s a factor for you.

In terms of health issues, females are more prone to reproductive issues (especially uterine cancers). These health concerns increase with breeding. Male hedgehogs have more issues with urinary tract infections, so the health concerns between genders ultimately balance out.

A pet store may be your most convenient option for buying a hedgehog. You’re more likely to find healthy hedgehogs and knowledgeable staff at a pet store specifically aimed at exotic pets than a large, more general shop. It’s unfortunately rare to find a large pet store that treats its hedgehogs well.